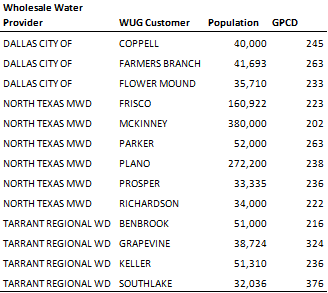 If these water user groups  with high GPCDs were able to get their individual use down to the compromise 140 GPCD value, this could result in additional reduction of over 400,000 acre-feet/year in 2060 and a regional average GPCD of about 130.  This kind of aggressive goal could make Region C a leader in the state (and the nation) in showing how to meet future water demand in a cost-effective and sustainable fashion.
Unfortunately, rather than an increased push towards more conservation, some Regional Planning groups, apparently including Region C, may try to push the pendulum back the other way.  The argument is that the new base GPCD projections supplied by TWDB are too low because base demands in 2011 may reflect implementation of drought contingency plans (reducing outdoor watering etc.)
Some have put forward the view that drought contingency measures should be included in the water plan as “supply strategies” rather than being reflected in baseline demands. They contend that drought contingency plans will not be implemented unless they are budgeted and planned for, and thus they should be included as water supply strategies.
Yet, Texas Law does require the development and implementation of drought contingency plans.  Thus, it can be argued that these reductions are similar to those that result from the mandatory plumbing code changes built into demand forecasts.
Moreover, if drought contingency plans are at least required to be in the demand forecast, the projected gap between supply and demand will be less, thus reducing the potential costs of meeting the gap.  Unfortunately, the last Region C plan states that drought contingency planning should not even be incorporated as a water supply strategy: :
Drought management and emergency response measures are important planning tools for all water suppliers. They provide protection in the event of water supply shortages, but they are not a reliable source of additional supplies to meet growing demands. They provide a backup plan in case a supplier experiences a drought worse than the drought of record or if a water management strategy is not fully implemented when it is needed. Therefore, drought management measures are not recommended as a water management strategy to provide additional supplies for Region C.
If that position were adopted by TWDB and drought contingency reductions were not included in the demands, the projected gap between supply and demand would be inflated statewide, leading to a much more expensive state plan.
Conclusion
The debate in Region C between TWDB and some who prefer to use higher demand projections poses an important statewide issue.  If the high demand approach is adopted b other planning groups, it could result in more proposals for unnecessary and controversial projects, bogging down the state plan in the type of conflicts that have arisen between Regions C and D.
The benefits of drought contingency planning on lowering demands for the planning process are clear. .  The baseline demands used should reflect these measures.  Failure to include them would mean that some water users will take on responsible demand reduction efforts, and the political and economic costs associated with them, while others look to state funding to help them build costly projects that may ultimately not be needed.  That is not a sustainable, or equitable, approach to state water planning.
Posted by Texas Center for Policy Studies at 2:44 PM